The rain was pouring down on the line up of bikes as we packed them into the Hub Vélo Van. It was early on Tuesday morning before the trip that weekend and all the riders were turning up pre-work to drop their bikes off and say hi to Oscar. Charlie and I set to work to pack the van. Fourteen bikes, one set of spare wheels, a big box of nutrition for on the bike, kit bags for all the riders, a very full tool box, many spare parts and of course the two mechanics, was the packing list. The van was fairly roomy in the end despite Mike’s worries of it not all fitting, so we figured a quick panicked call to him saying that it didn’t fit would make his day! With a quick pit stop at the shop to stock up with coffees, cake and canned drinks, we were ready for ten plus hours until we arrived in Dijon. After a night there we arrived in Bourg d’Ossain the next day shortly after lunch. Bikes were unpacked and built, shopping was done ready for everyone’s arrival in the morning.


Day one – Mike and all the riders boarded their flight to Dijon at dawn on Thursday. Charlie was waiting at the airport with the van and a second van driven by Mike for the airport transfer. Meanwhile I spent the morning giving all the bikes a wipe down, oil of the chain, inflate tyres, safety check and general tuning of brakes and gears so that everyone was going to have as smooth a week as possible. A quick lunch after the riders touched down in the apartment, and then it was an afternoon ride up to the Balcony. Around 30kms with just shy of 800m of climbing it was a good warm up to the long weekend, with a beautiful view from the top (as shown right). 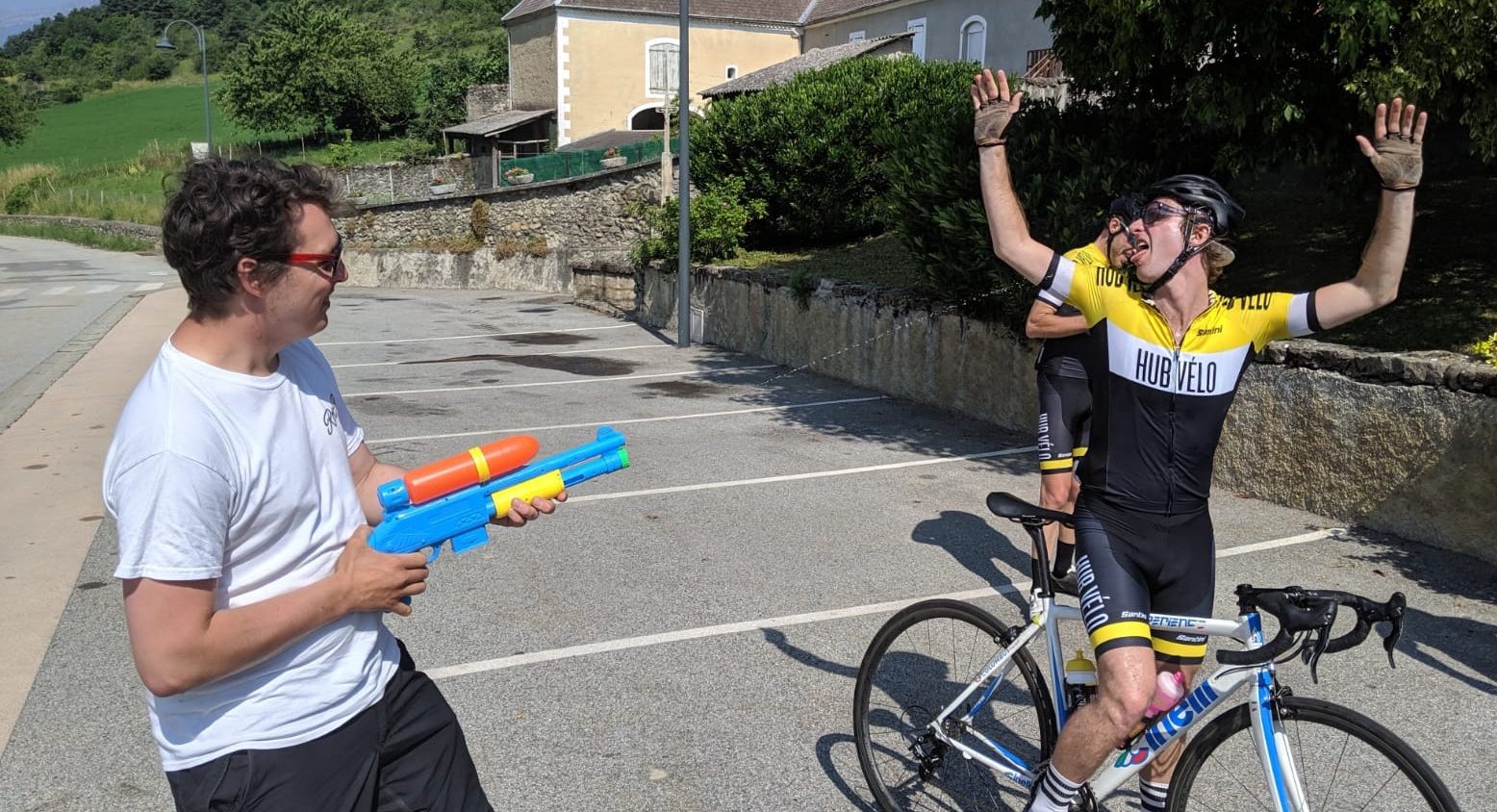 Day two – it was much of the same, beautiful views and lots of climbing. We started the day with a pacey 25km ride down the valley until we reached the bottom of the Col du Morte which was a grueling hour of pain for Angus and I at the front as the heat of the day started to grow on us. At the top we stopped for coffee, everyone caught up and we filled our bottles and pockets up from the gooddies in the van and headed down the 30kms of rolling decent. The second and final climb of the day was Col d’Ornon which we had a quick stop at the bottom for a cold glass of coke only to be attacked with Charlie and his newly bought water gun. This climb was much easier than the first but the temperature was high now, climbing above 40 degrees so everyone started to suffer, especially me with my irish heritage. However everyone made it and the decent that followed was stunning with lots of sweeping corners. The ride was followed by a splash in the pool on the grounds, many ice creams, some beers and recovery drinks.

Day three – we attempted Alp D’Huez, well most of it. With a visit to the Balcony to begin, we descended then down which places you just after hairpin 17, with just over 9km to the top of the climb! Everyone fought a battle there but I was told to fight the battle that was Mike Mooney, who had made an early break away on the descent from the balcony. I caught the boss just after hairpin 4 and had to leave him behind for victory. Coffee at the top was enjoyed after the suffering and then we continued to climb to the top of Col du Sarenne. A long narrow descent followed all the way to a dam, again with stunning views (shown right). One more steady climb to top off the day before another rolling fast decent all the way back home. After the ride we hopped in the van, headed up the road to Oz where there is another dam with a glacial lake, a quick dip to cool us off followed by a beer – perfect post ride recovery. 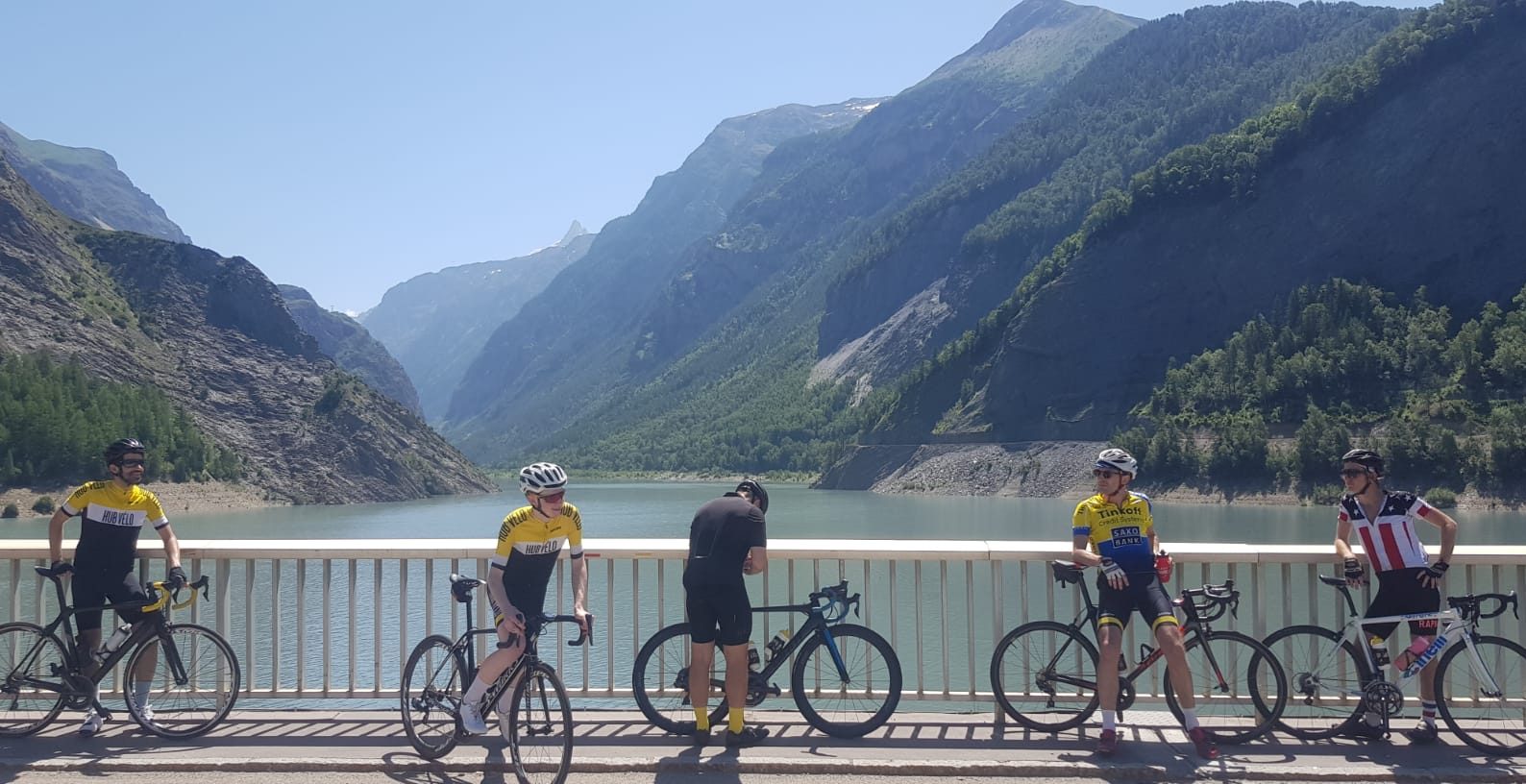 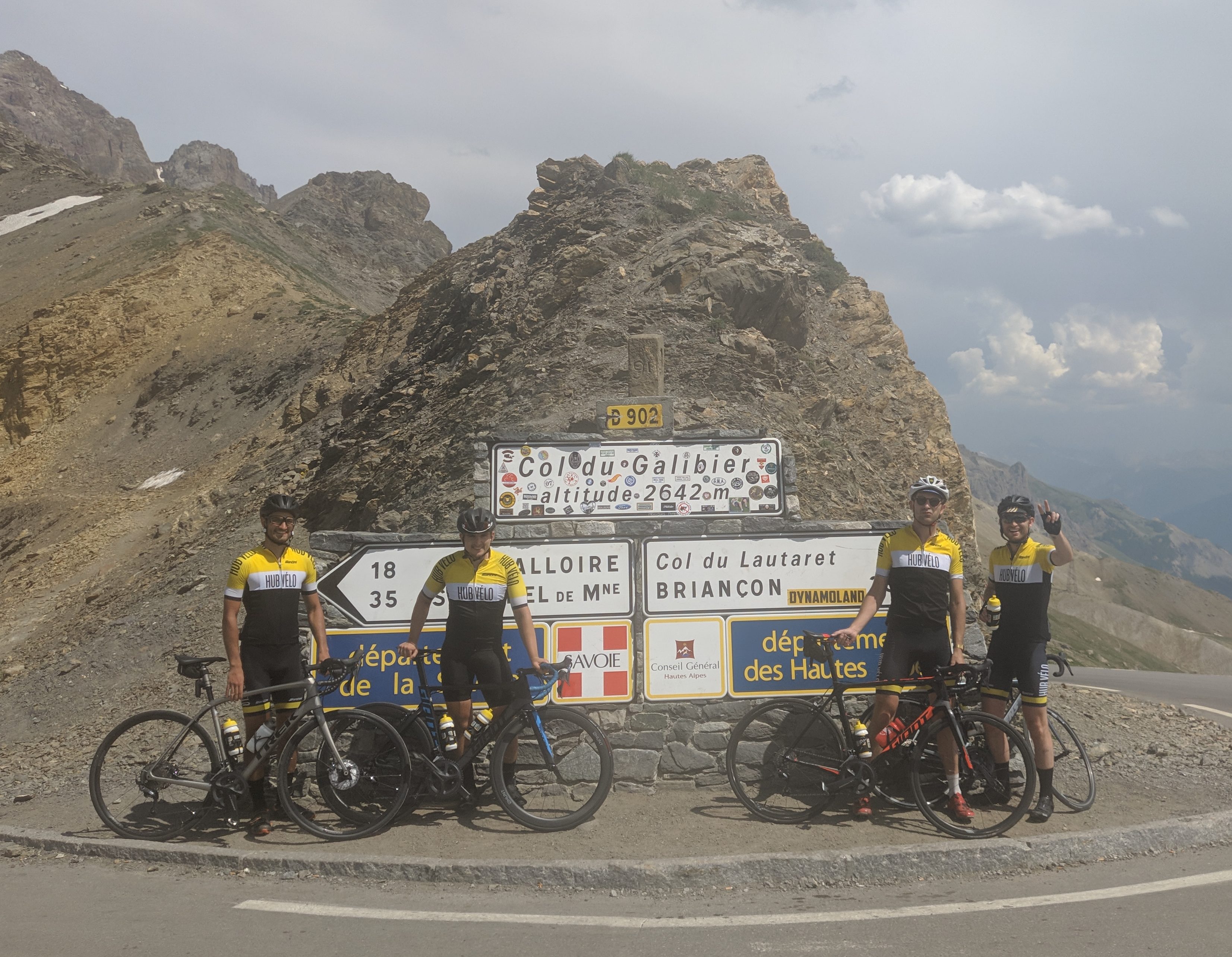 Day four – the queen stage! The group split into two – one for the infamous Marmot route and the other a killer 130km ride. The day started early to avoid the heat, my group and I headed to the bottom of the Col du la Croix de Fer, just over 30km of steady pain. It was a good start to the day, with a coffee at the top but with gradients ramping up to 17% it hurt the legs. We descended down a lovely decent into the valley, followed by a fairly grim ride on a main road up the valley. A quick pit stop in the town for water and snacks, then we attacked the Col du Telegraphe or as Jordan liked to call it: “Col du Guardian”. The heat was rising over the 40 degree mark but chips and Coca Colas awaited us at the top, and next up was the biggest test of the day – the Col du Galibier. The Galibier was brutal, 18km, peaking at just over 2600m and with the temperature at nearly 50 degrees celsius, we were really suffering. I rode it with Jordan as Enrico and Andrew rode off ahead, his mind was set on that pistachio ice cream as he dug as deep as he could in those last few kms. Once you get over the 2000m mark the air starts to thin, by the top it is cold and there is still snow around you, with the wind picking up. We then headed home down a rolling 50km of decent. Paty had a tumble in the last couple of kilometres from sheer lack of energy and with a small touch of wheels ended her ride. She had completed all the mountains, all the vicious descents so having spoken more recently about it we can now smile and laugh about that day. Like the best of cyclists she had conquered the road and earned some battle scars on her way.


Day five – the trip was coming to an end but not without one last grueling ride. A short spin up a beautiful climb by the name of Col Du Solude, around 14km in length with the last few kilometres on gravel. It was a super quiet road through the trees and some unlit cavernous tunnels, which in one I had to stop and use my torch to highlight a corner! Then an aggressive narrow descent which lead onto the last few kms of the descent from the Col d’Ornon which we had ridden on day two. A couple guys opted to attack Alp D’huez from the bottom instead, so they could grab an official time, but most of our legs were aching too much from the previous days epic rides! It was then off to the airport and home time for all.

Charlie and I then packed up and left on the evening of day five, a road trip home through a crazy lightning storm in Lyon and a quick sleep in Dijon again. Bikes were home late on Tuesday, built and ready for pick up along with kit bags from Hub Vélo. Mike, Charlie and I have all done many tours with many people but all agreed that we enjoyed this one in particular. We look forward to next time, either in the Alps or another destination, with more faces, both old and new.

” Amazing trip and epic. Fantastic organisation and support by Hub Vélo, many thanks “

” Iconic climbing with endless descending… What an experience for a first timing in the Alps, the Hub Vélo team organised everything perfectly even the weather!”

“5* for riding, routes and company. Looking forward to next year! “ 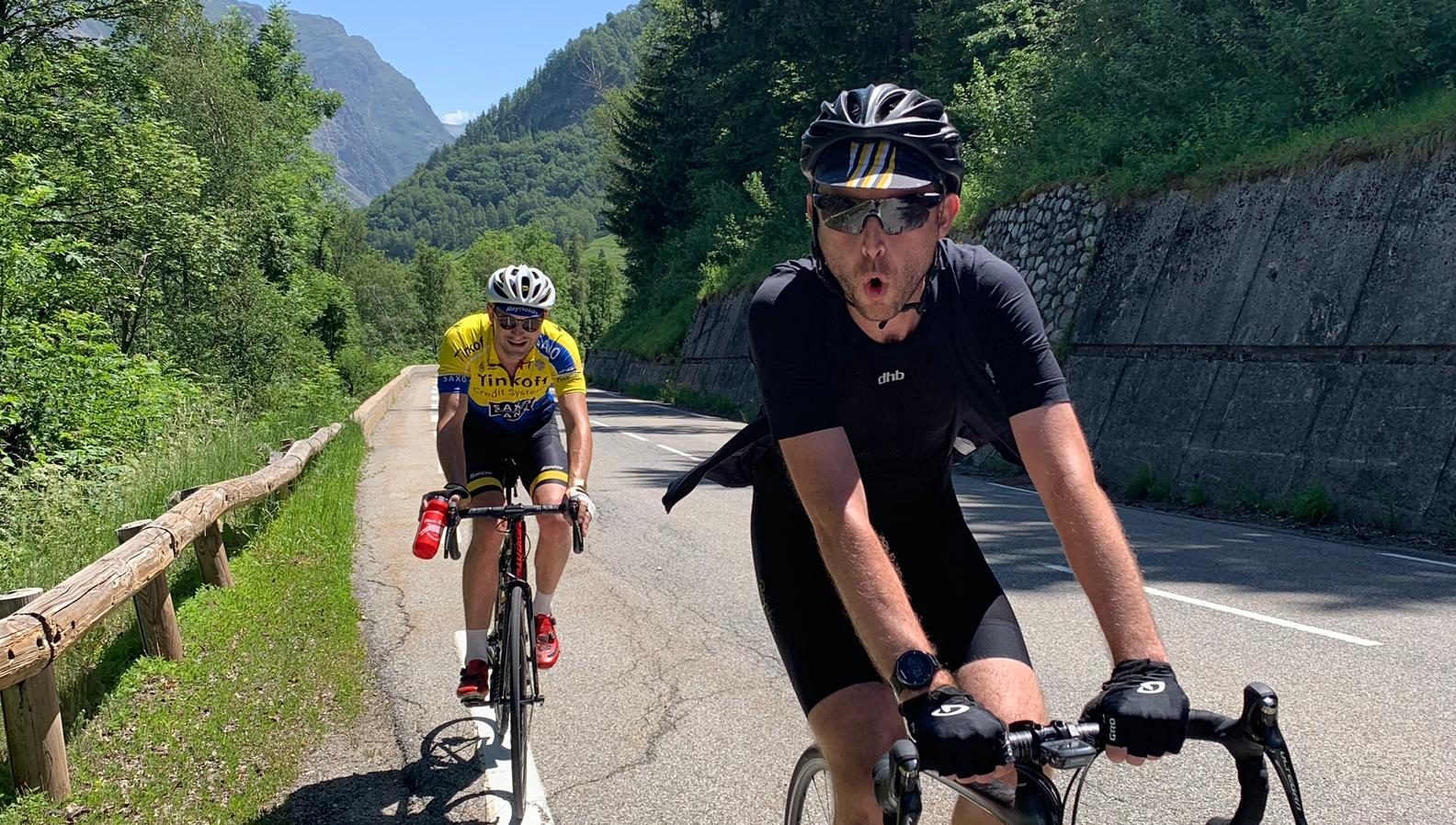 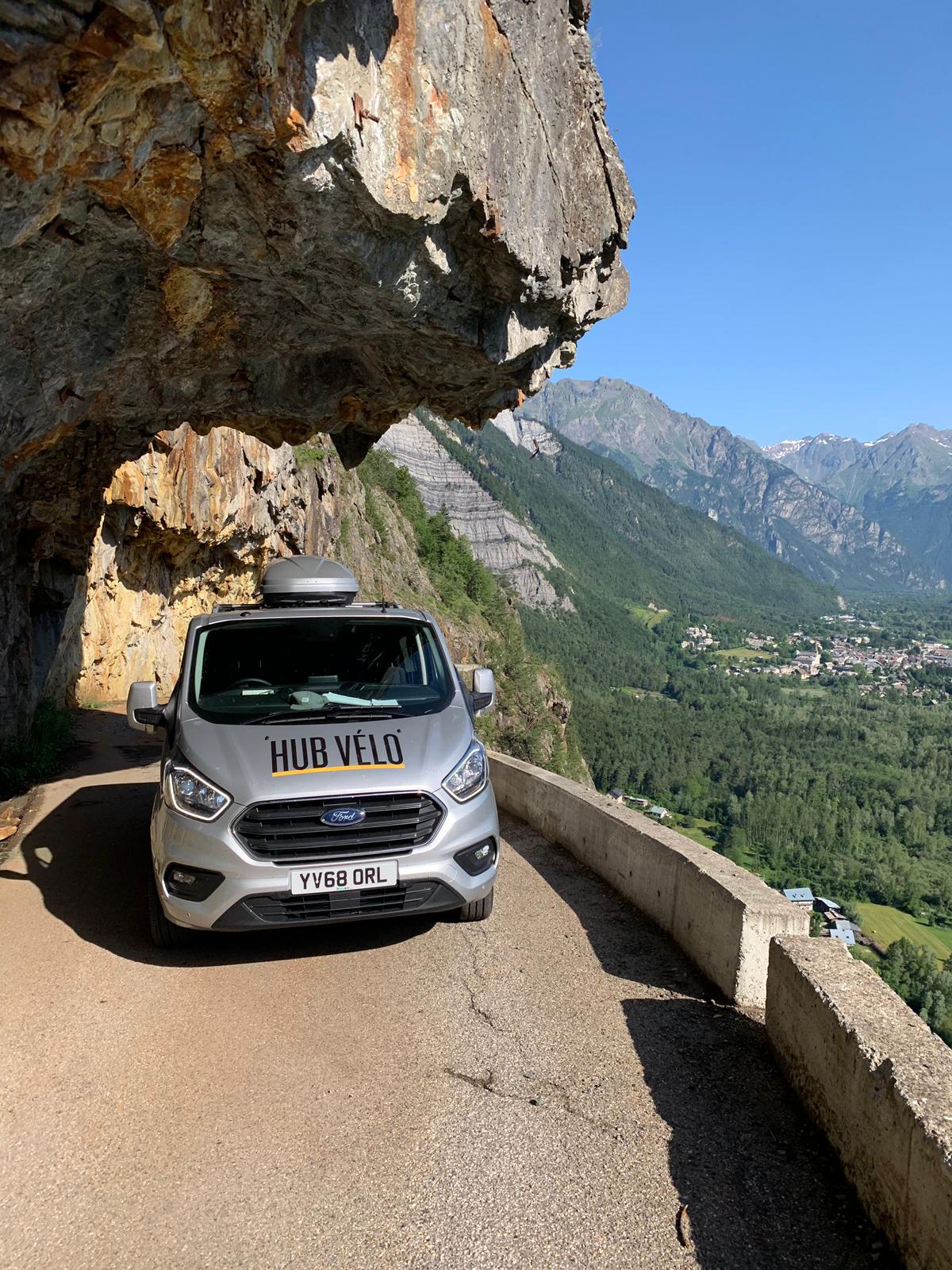 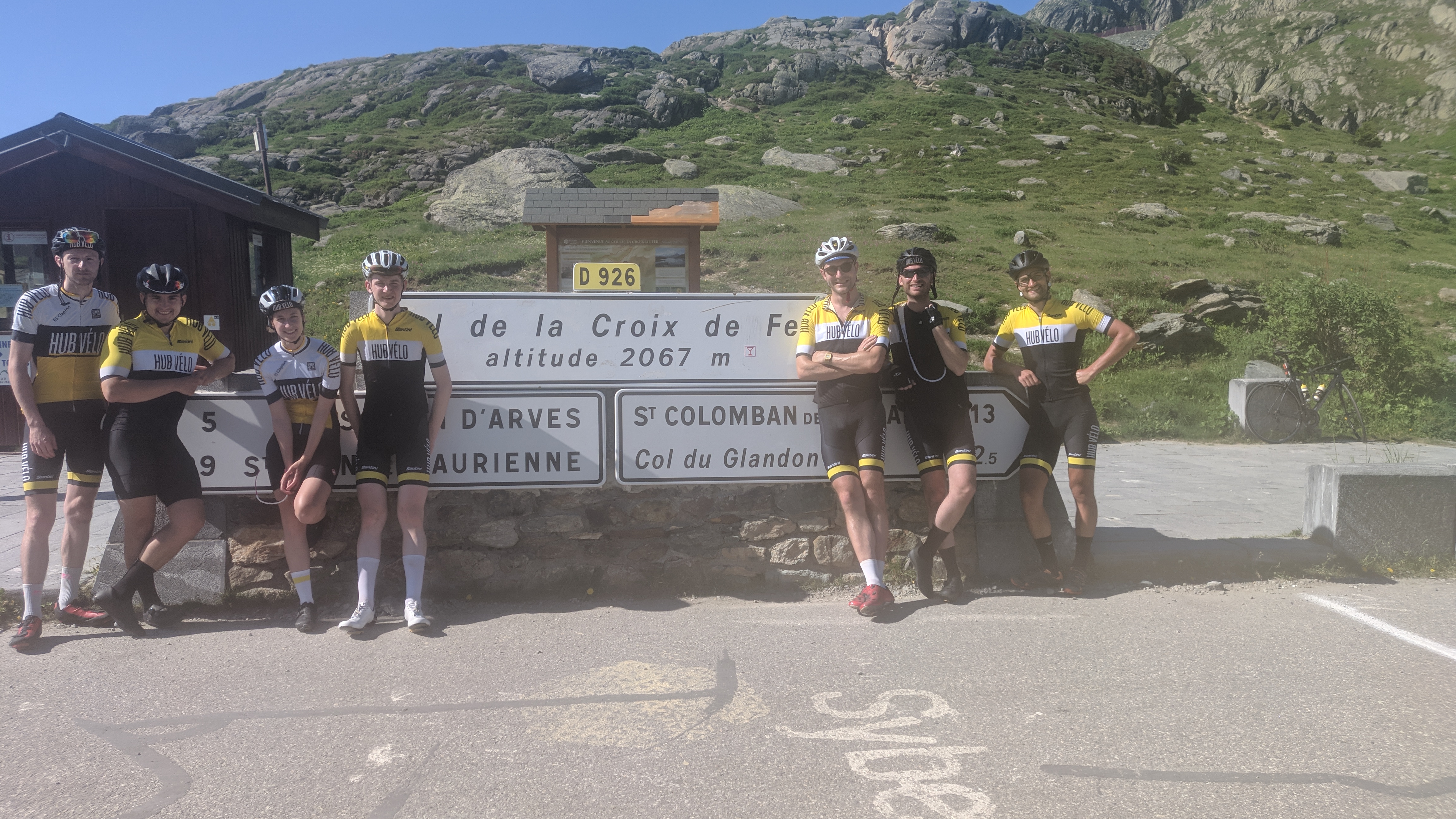