As the clocks went back and the weather turned cold, it was another busy weekend for Hub Velo racers. We were represented at several venues around England and Scotland. Furthest travellers were Anouskha who went to Irvine, Scotland for the National CX Trophy 2ndround and Calvin who went to Stocksbridge (near Sheffield) for the National Hill Climb Championships.

Karen (Senior Women)  It was clear blue skies with a bitter and strong wind at Cedars Upper School in Leighton Buzzard for round 7 of the Central League. There were 51 starters and the commissaries were impressed with the size of the field. Two riders shot off and out of sight from the gun, and I ended up in a chasing group (that didn’t give much of a chase!) of 4 riders. This was my first-time riding in a group in a cross race so it was interesting to try and think tactically for once, rather than just working at my own steady pace for the full 40 minutes. It was a relatively fast course with compact grass and long straights, the wind was strong, and I wasn’t feeling very sparky, so I did a fair bit of sitting in! We managed to drop one of the group, before Charlotte from Les Filles pulled a good move out of the hurdles and left just two of us behind to battle it out for the last lap. I managed to pull away from my rival (a junior… shhhh…) out of the final bend into the finishing straight. I was 4th overall and 3rd of the league affiliated riders. Pretty happy with that. Plus that’s now two consecutive races without a mid-race lie-down 🙂 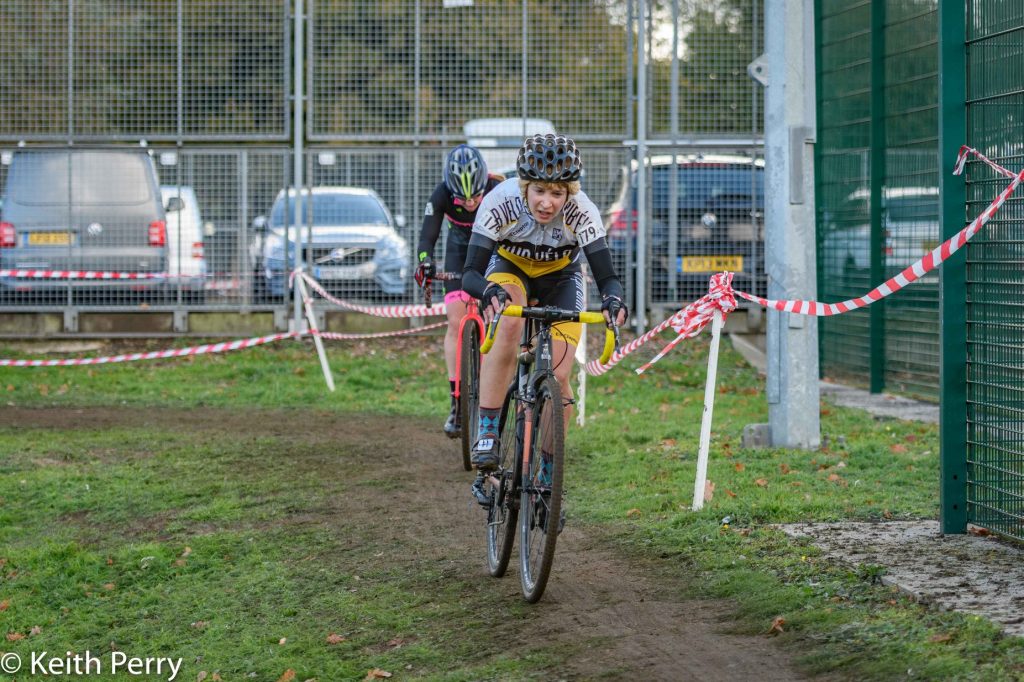 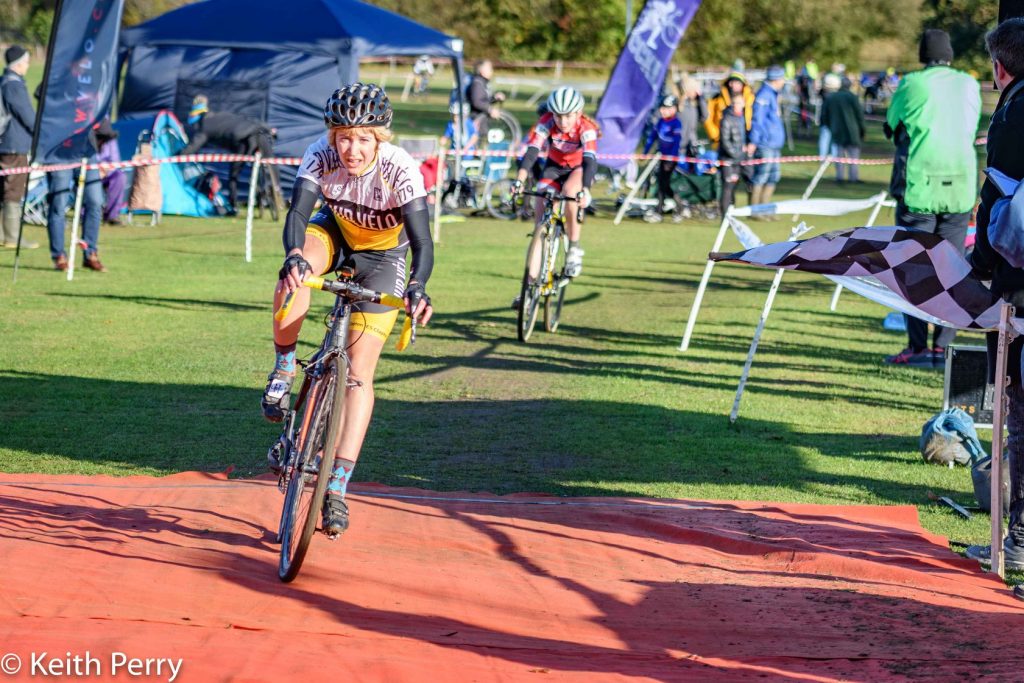 Adam (Vets 40-49)  It was chilly enough for the first application of embrocation of the season, (much to Gary’s derision) and the field of 98 all piled into the first corner without any fallers. I was gridded 49th and finished the first lap in 50th place. After my early races of the season where I was going off too fast and fading at the end, I tried to work on my pacing. By the end of lap 4, I was in 43rd and finished the race in 40th position.

I don’t normally like flat courses but really enjoyed the variety of this course – lots of hairpins, a few decent straights, some tricky off-cambers and a bit of sand. The day before I had watched a few Jeremy Powers videos and had his ‘tape-to-tape’ cornering mantra in my head – seemed to make a positive difference! I’m up to 27thin the League. 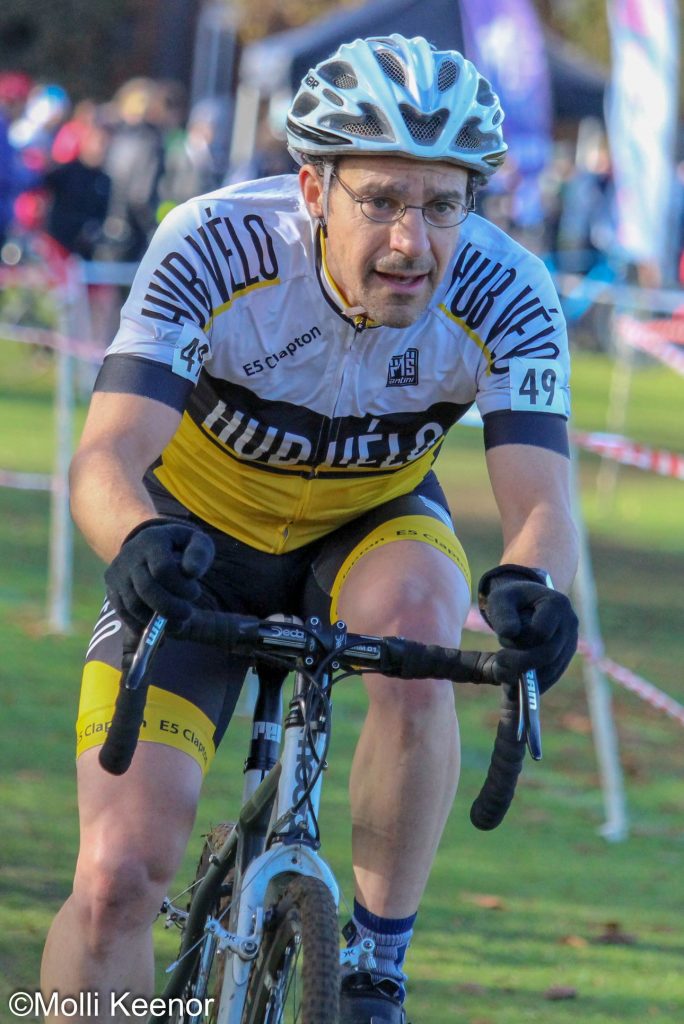 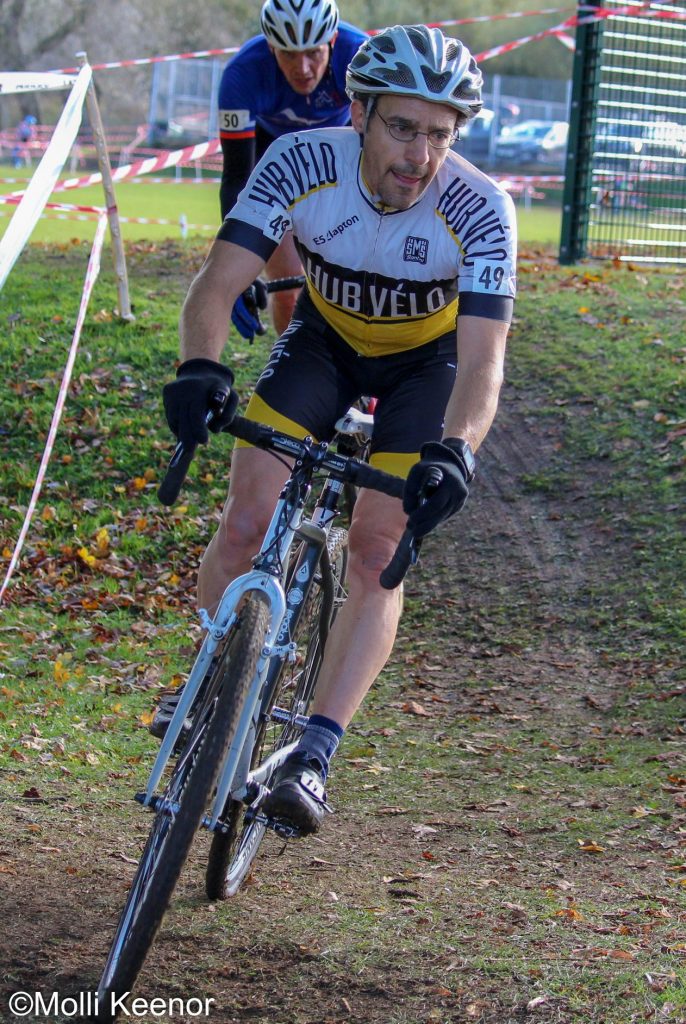 Enrico (Senior Men)  The drive in the van to the race was once again super lovely, with plenty of #learnwithgary moments discussing the imperial measurement system and so on. Always great stuff.

Luckily, at Grafham Waters there was plenty of sun and the course was not too wet, at all. While being relatively flat, the course featured A LOT of twisty turns, two beach sandy sections – perfectly rideable, and good fun! -, three woody singletrack bits and a weird “bus stop” section with 5 ups and downs a bank. Definitely not my forte, given how flat it was, and it certainly showed!

I was starting in 4th row, and unfortunately the beginning of the race was quite chaotic: the guy in front of me could not clip in, so we lost some time, and after going around him and getting to the first turn an overexcited racer decided to launch head-first into the bushes, to the amusement of all involved. That also meant that there was a significant pile-up of people trying to squeeze past and battling for position. The fact that the course tapered significantly 200mt from the start meant that there was plenty of waiting, and running the first sand section in the hope of overtaking slower riders.

At the end of the first lap I was not in a very good position, so I had to dig quite deep for the rest of the race to try and make up some ground. I’m very used to short bursts, rather than long drags, and that meant I was not really able to push as much as I wanted, settling in rather than sprinting out of the saddle when needed. Anyway, in the last lap i did manage to get to 4 other guys, pass them before the last turn and hold them off in the sprint, which was nice, but also a sign that maybe I had more in the tank than I should have at that point of the race. 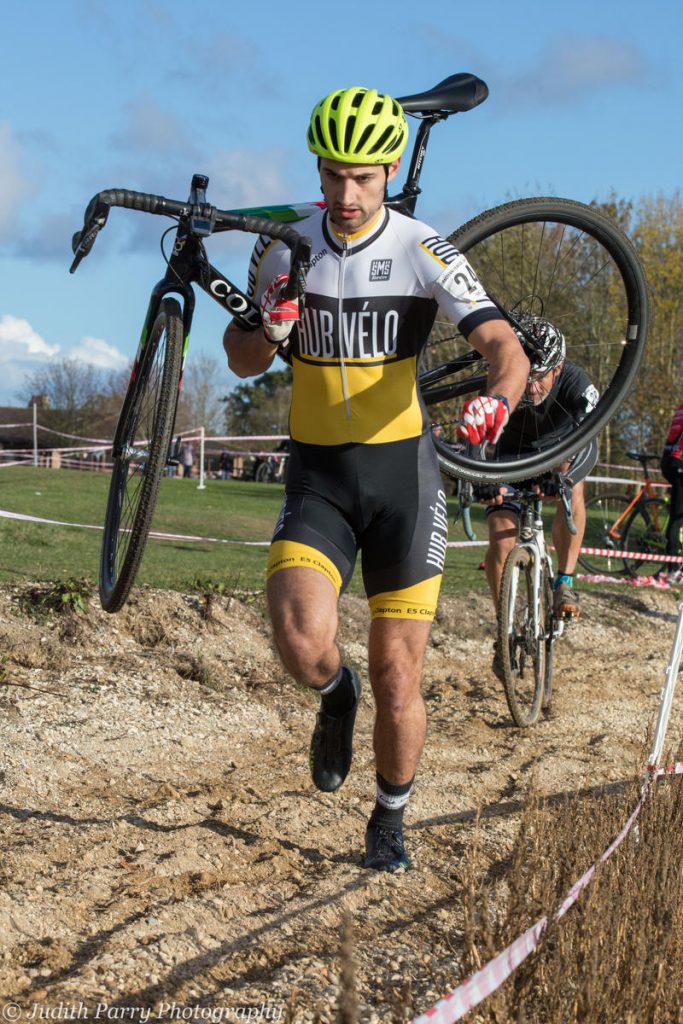 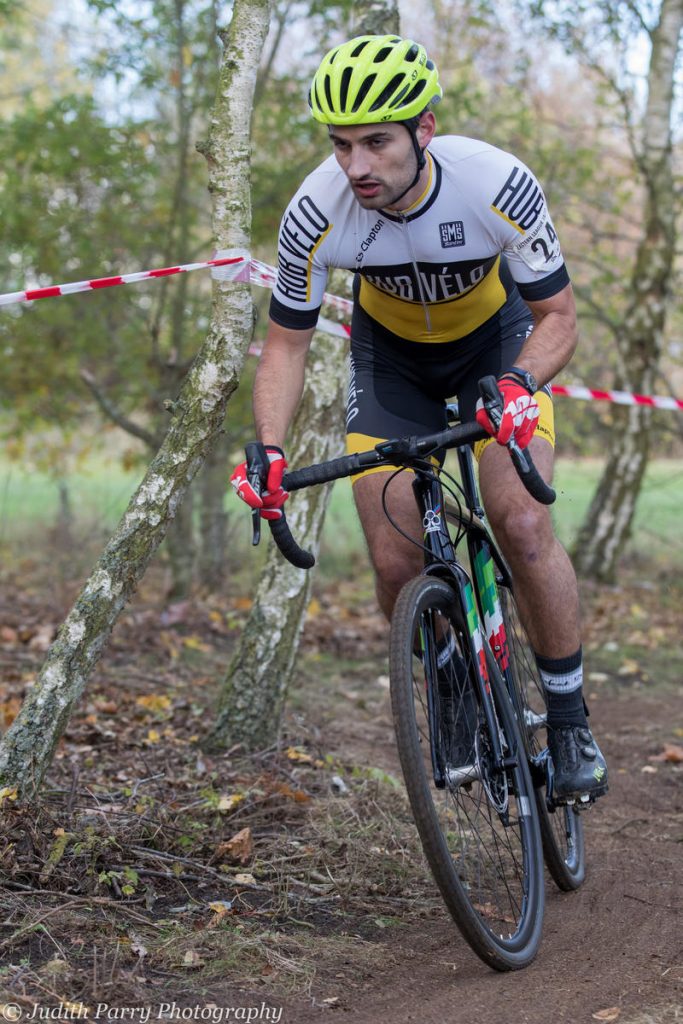 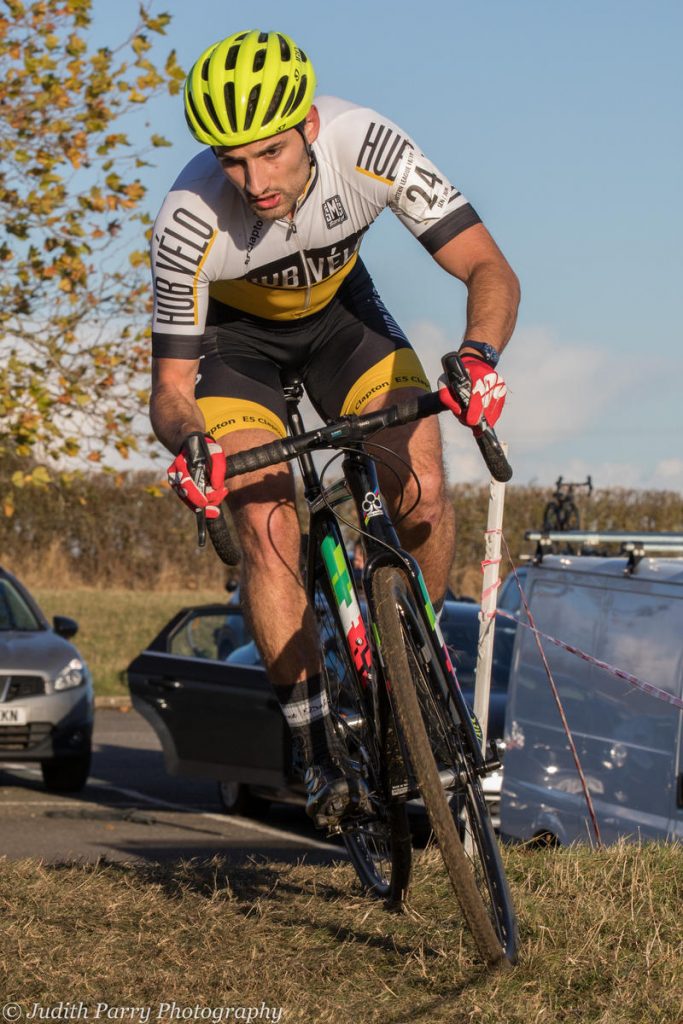 Gary (Senior Men)  In a best supporting role Pat Hayes raced the Seniors rather than his V50 category and looked super strong and even gave me a push before a schoolboy error on a rutted and cracked hard surface saw his front wheel dig in and catapult him over the top. Rumours of photographs of the incident have yet to be confirmed. For my part falling on the beach and in the woods as well as being held up by the crash coupled with a complete lack of skill meant finishing last but given the attrition rate of a tough course enough points to move up to 28th Senior in the League. I will take that!! 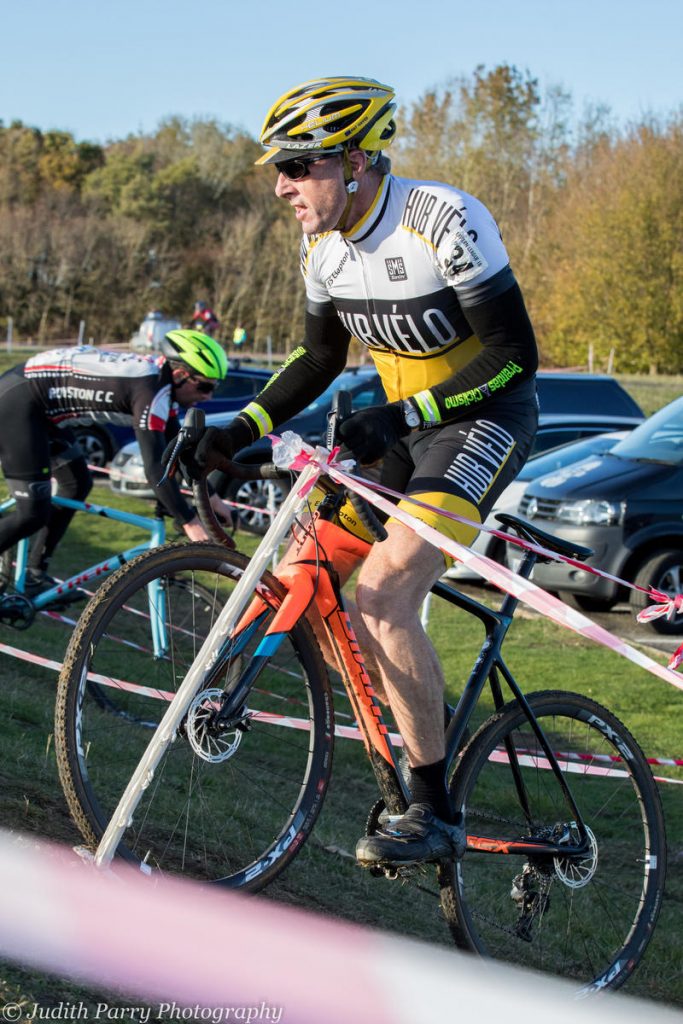 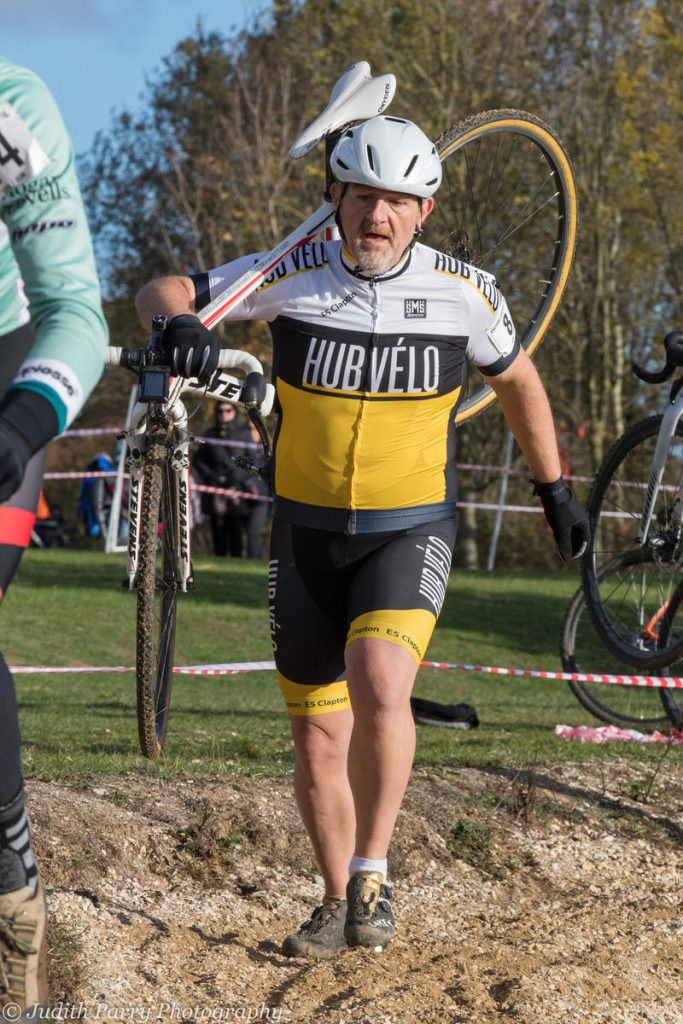 HV Youth  In the Youth Race three HV members battles it out with Serafino not finishing in his U14 category on a testing course with plenty of technical sections and two visits to the beach each lap and tricky switchbacks on the traditional off camber sections. In the U16 Ollie Griggs finishing 15th in the U16 and looking strong.Also in the U16 race Jack Emerson continued his great progress with a solid 18th position in the race. All in all though Grafham Rider of the day must surely go to Alessandro Sella, who had a stormer finishing in his best position as a Youth rider with a 5th place U16 – Chapeau Master Sella! 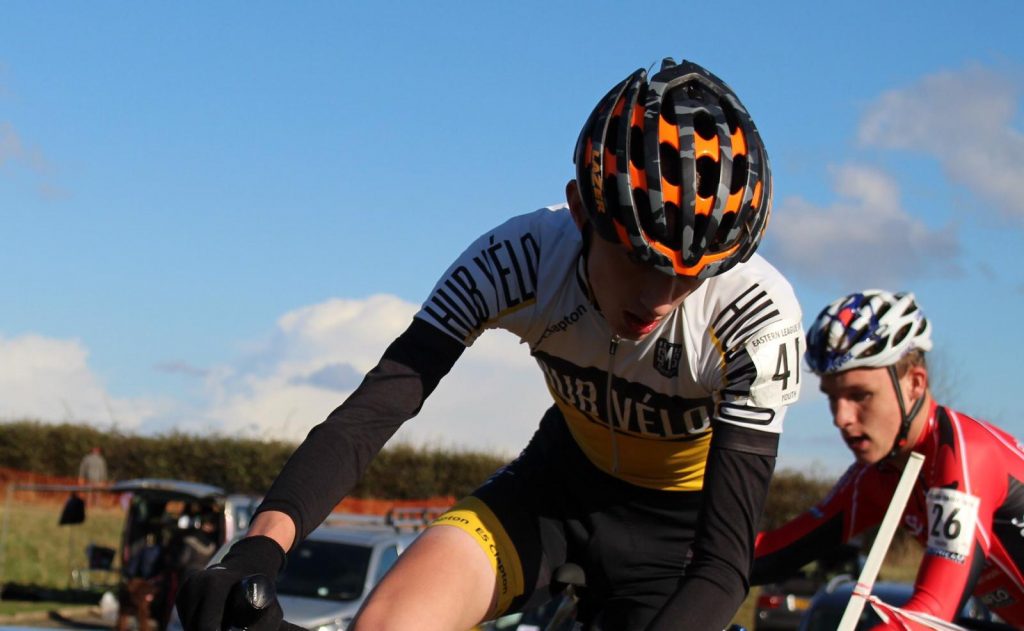 Anouskha (Under 16s)  In Scotland at the National Trophy Anouskha Minale was in the thick of it. At a picturesque venue on the Ayrshire coast the National Trophy made its debut in Scotland.  Anouskha had a perfect start position gridded front row but then everything happens that could possibly happen but in a bad way. Unclipped at the start, lost about 30 places. Had her wheel caught in someone else’s discbrake in the sand pit, chain came off. In last place at this point. Noushy made her way through the field to finish in 9th. Definitely not a boring race and a performance of great character – chapeau Miss Minale. 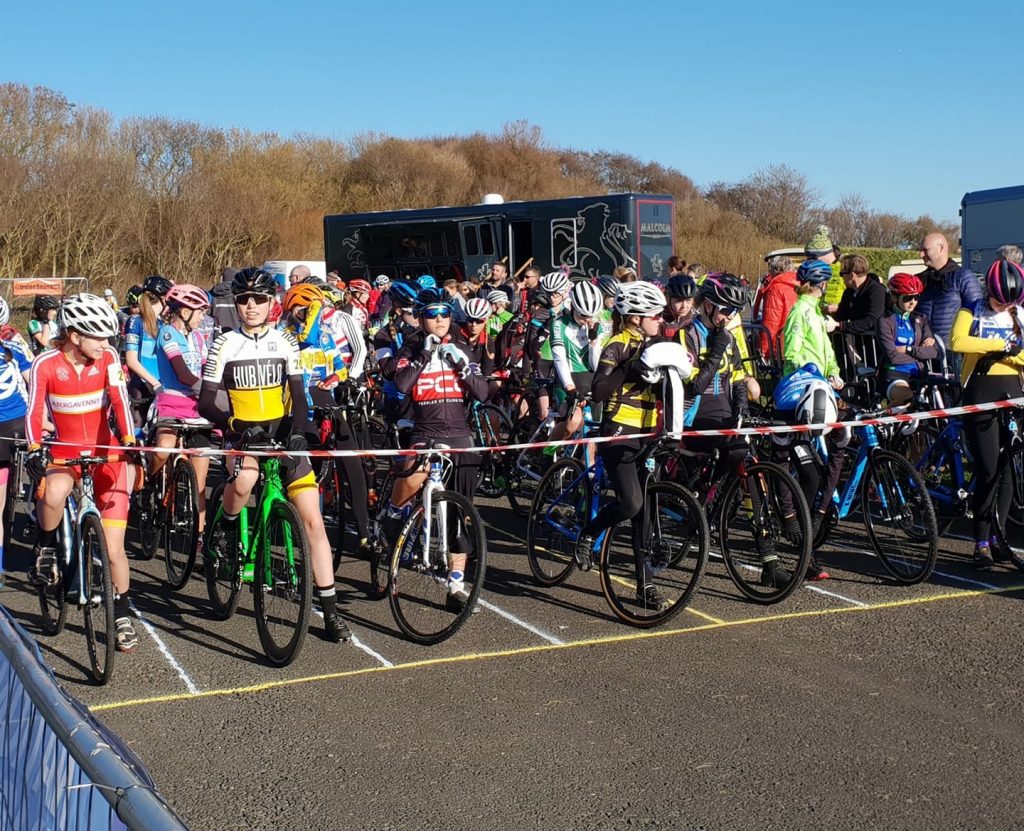 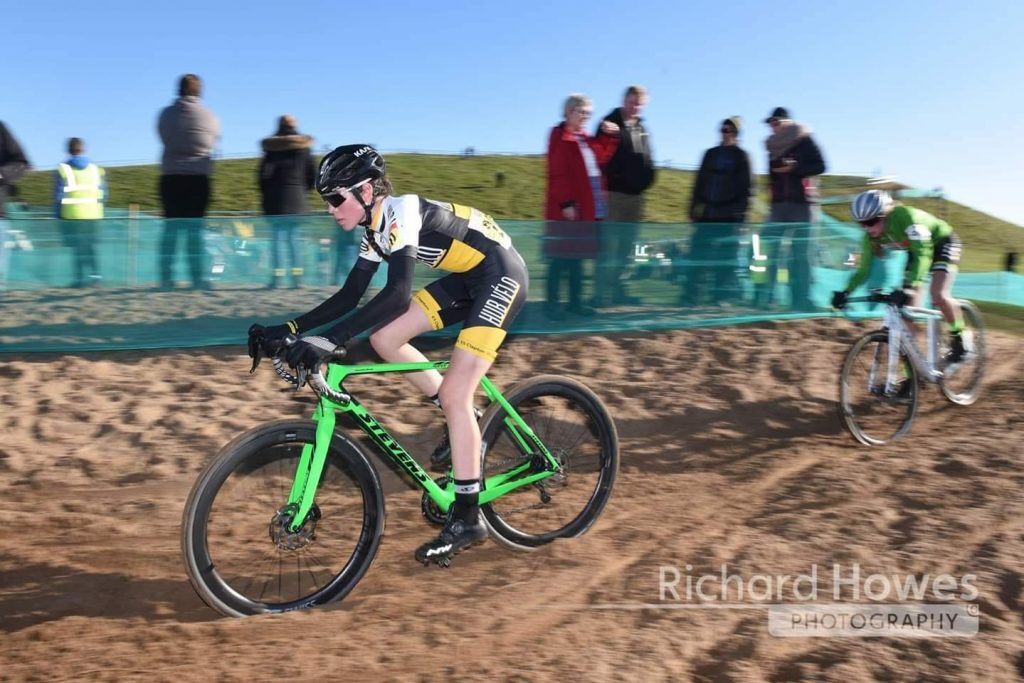 Calvin was seeded for the National Hill Climb Champs held in Pea Royd Lane in Stocksbridge, Derbyshire following some sufficiently good results through the Hill Climb season. The course features a relentlessly steep hill averaging 13% that starts in the northern end of the valley town and finishing in an exposed hilltop moor.

The day was blessed by good sunshine, however was deceptively cold with temperatures barely above zero throughout the day with riders negotiating a very tough headwind section in the latter half of the course. This didn’t play into the hands of Calvin whose 2pm start time was greeted by a passing hailstorm and winds picking up. 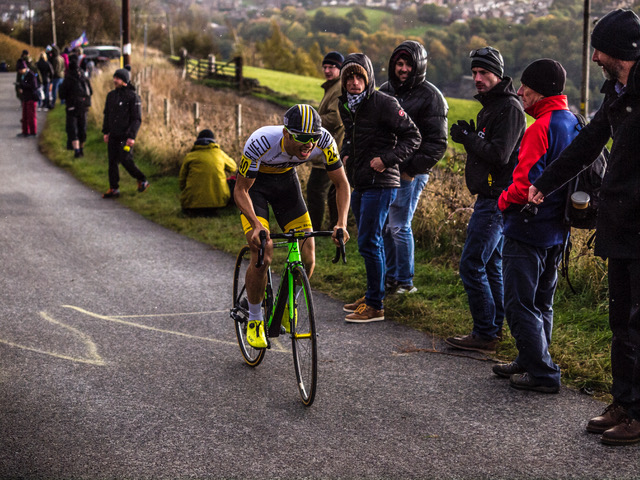 Friends of the club

Issac Mundy was riding in the Central League Senior Men race and won the race by well over a minute. 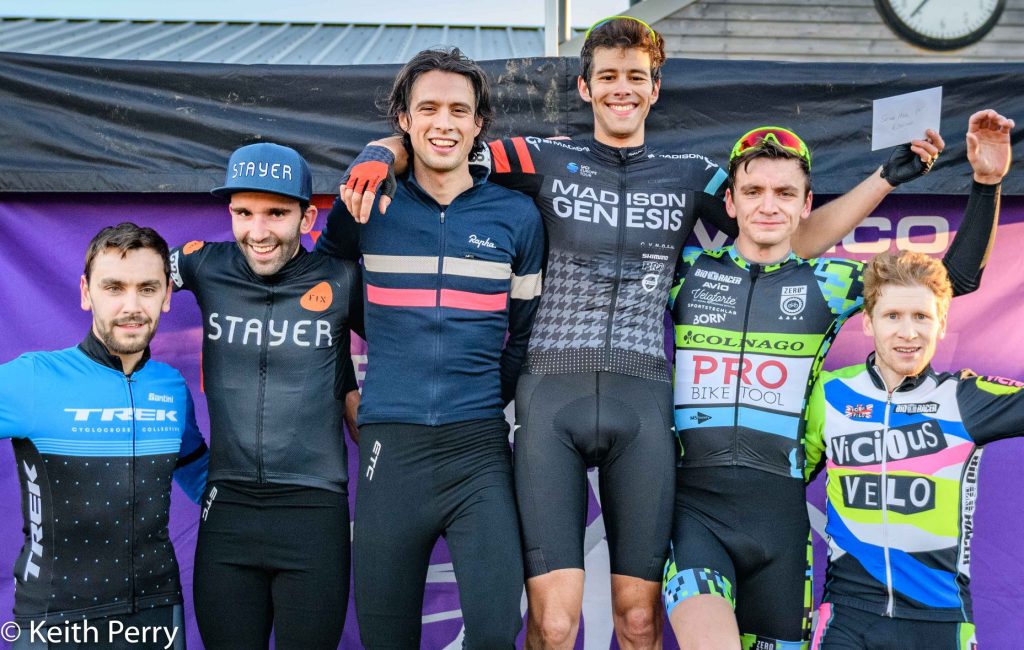 Russ Jones from Hackney GT (who we train with on Wednesdays) came 4th in the Men’s V50. 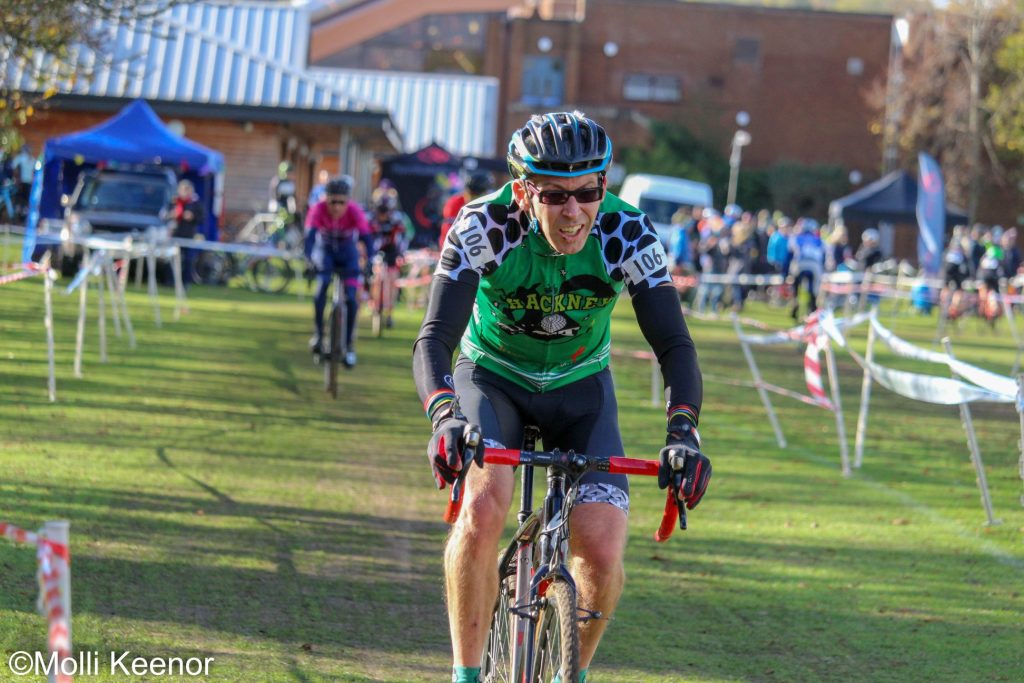 Matt Noble at the Red Bull Time Laps, a 25 hour, team endurance race to coincide with the change of the clocks. The formula is simple, the most laps wins. However between the hours of 2am and… 2am when the clocks go back, a smaller lap is introduced that counts for double.

I raced in one of two 6am Cycling teams in the mixed category as a last minute replacement for injured riders. After a strong start we drifted from second in category to fifth by the end of the 25 hours battling with the other 6am Cycling team who finished sixth in category. Both teams finished 42nd and 49th respectively out of 190 teams that included national caliber riders and a active grand tour rider.

With only one rider on course at a time we tended to stick to 1 hour on, 3 hours rest with each hour feeling like the effort of a time trail. The early pace combined with the bitterly cold windy conditions and the build up of sleep deprivation made this event way harder than anyone anticipated. 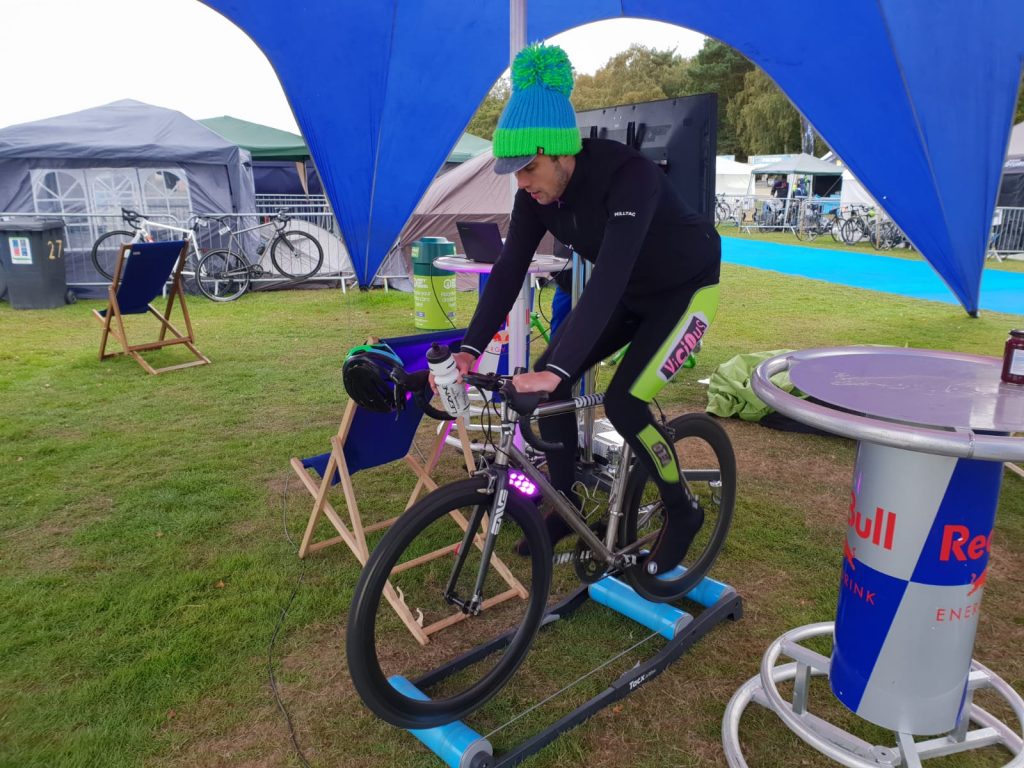 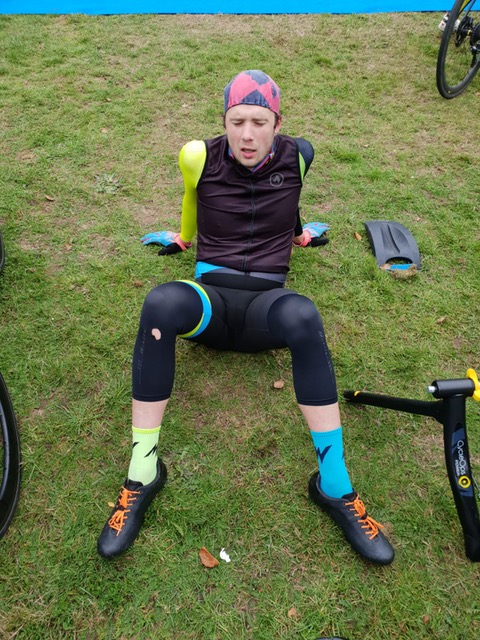 Over the weekend, James Madgwick (Bloodwise-QSW) competed in the Elite Men’s race in Round 2 of the National Cyclocross Trophy Series in Irvine, Scotland. Gridded 15th, he got a good start and pushed to a top 10 slot. A close encounter with the course netting (resulting in a Mathieu van der Poel style injury, marginal gains means risk!) dropped him out of the top 20 but he powered back to finally finish 15th overall. James’ support and pit team included Hub Vélo’s Jason Warre. This week James will be heading for the Koppenberg Cross with Isaac… 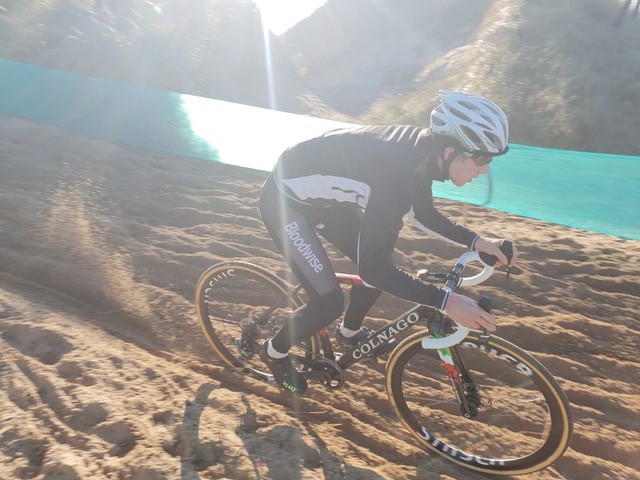 This week’s report was edited and compiled by Adam Coffman