Here’s your roundup of yet another busy weekend of on and off-road racing for Hub Velo club members and friends.

On Saturday, Kai, James and Leo were racing the first of the Full Gas winter series crits at the Hillingdon circuit.

Kai and James were representing Hub Velo in the 2nd/3rdcat race, where a two-man break slowly crept away from the first lap onwards with a chasing pair soon to follow. Five laps to go, the 18 year old leader dropped his companion for dust and went on to hold his solo lead for the win.

Back in the main group, James had been working hard (some might say spending too much time on the front!) looking to up the pace to reel in the breakers. But, in what several sources report to have been a very negative race, attentions were clearly focussed towards the sprint finish and nobody was up for working with James. With the sprinters winding up on the last straight, Kai chased the right wheel and pulled a 2nd in the bunch sprint (6th overall).  James, with less left in the legs after all his earlier work, came through 11th.

Next up was Leo in the cat 4 race, looking to secure his 3rdcat licence before the end of the season. Leo positioned himself consistently in the top 3 wheels, avoiding working too hard when leading the pack. There were a number of pairs from clubs trying a few moves, which Leo neutralised at each attack. At 40 minutes to go, the breaks stopped but the surges continued. On the final lap the pace picked up slowly but surely, with Leo still defending his 3rd wheel position. Half way down the long finishing straight a rider flew across the track, pushing Leo sideways and forcing him to start his sprint earlier than anticipated. Leo managed to pull away and win by one bike length, saying goodbye to 4thcat for good in what was only his second point scoring crit. Well done, Leo!

There was another strong showing from Hub Velo out at West Stow Country Park for the 9thround of the Eastern Cyclo-cross league. A new course this year, it was generally flat and bumpy with one main hill climbed 3 times each lap. Other than that the course had a sand pit and consisted of short straights and tight corners, with most of the course being on soft spongy ground with small bits on gravel, sand and tarmac. In the words of Gary, it was a “glorious day and a course that put the old back into old skool. At the site of an Anglo Saxon settlement, the rutted but fast running course was an energy sapping challenge throughout.”

In the Seniors race three riders lined up for HV. William Warre, despite a reported clothing malfunction, came in 39th, Pat Hayes came in 31stm whilst Gary Boyd (despite hitting the deck a number of times) came 55th, no doubt spurred on by the banter from the pits. Meanwhile, friend of Hub Velo James Madgwick (Bloodwise-QSW) won, having led the race from the start, at one point extending his lead over the chasing group to nearly a minute. 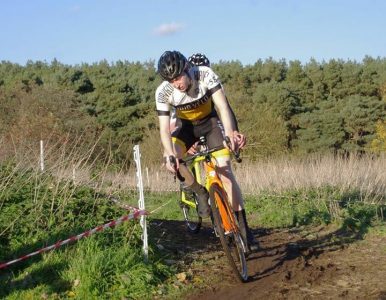 Round 8 of the Central League was also a brand new course, hosted by Icknield CC at Whipsnade Zoo. It was an overcast day but mild and dry, with Adam reporting the course to be brutal: “probably the most challenging course of the season so far, with the long grass, ruts and headwind and nowhere to catch your breath”.

The tough course led to some really exciting racing. In the men’s vet 40s, HV’s Adam Coffman fought hard in a three-man sprint for the finish on the final lap, finishing 57th(gridded 61stout of 112 starters). Adam continues his week-on-week climb up the rankings and has now moved up to 26thin the league.

There were no Hub Velo club members competing the senior men’s race, but the race was dominated by friends of HV, Isaac Mundy (Madison Genesis) and James Madgwick (Bloodwise-QSW) among others. Isaac led the charge from the whistle while James, gridded second row, was blocked. Isaac progressively opened up the gap to second place and gaps appeared between the top six places. Meanwhile James caught up to third place after Jonathan Dennis (Kibosh) stopped in the pits to re-inflate his front tyre. In the penultimate lap the efforts of pushing a third race in the space of four days began to tell as James hit the wall. Isaac won the race, with James crossing the line for the last time in 6th place.  Next stop National Trophy… 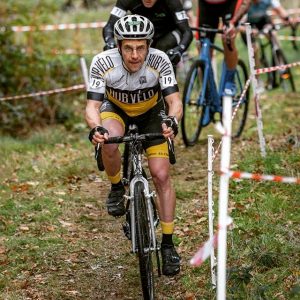 Adam Coffman at Icknield Cross… I hear a rumour he’s looking forward to the mid-season break! 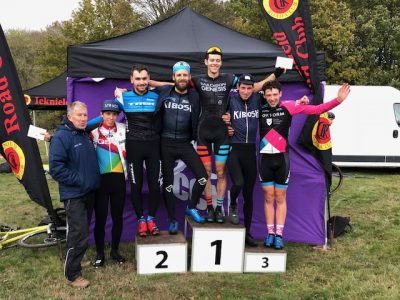 This week’s report was edited and compiled by Karen Tostee