Last weekend was all about the cyclo-cross (and only about the cyclo-cross). Hub Velo rider Adam Coffman represented in round 11 of the Central league at Hillingdon on Saturday, while Sunday saw yet another big day out for the Gary Boyd sponsored support team, with youth and senior Hub Velo riders racing at Trinity Park in Ipswich for round five of the National Trophy series.

Adam on (hell in) Hillingdon:

On days like these, I wish I had stayed in bed. Round 11 of the Central League was at Hillingdon and the rain during the week had turned the course into a quagmire. One section was literally under water. I don’t like mud and this was a test of technical skill over fitness – one in which I failed. I didn’t fall off, but I probably wasn’t going fast enough to do that. I ran quite a few sections including a notorious corner that saw lots of fallers and a very slippery off camber descent. My studs were my saviour! I survived it and in hindsight kind of enjoyed it. Gridded 59th I finished 63rd.  I am 42nd in the League with 3 rounds to go. 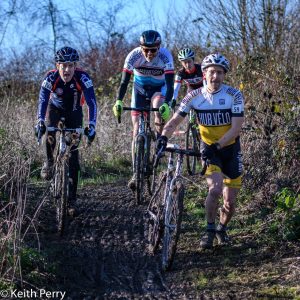 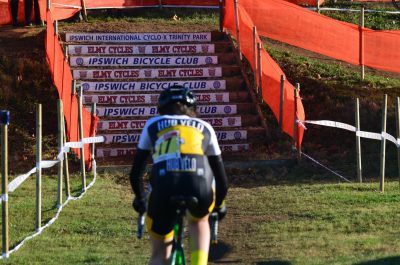 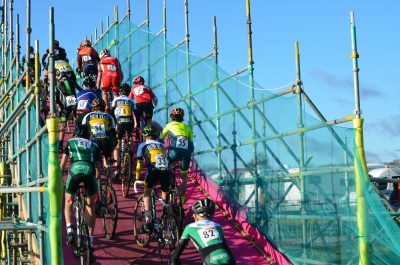 Part 1 – Enrico on Anoushka’s race and Gary being awesome:

It was an incredibly early start on Sunday for me and Gary. With the potential for him to pit/wash bikes/help during Anoushka’s race, we were off by 8 AM, with Gary very gently picking me up at my place. Undeniably cool levels of support that would be sustained for the whole day!

Once at the course, it was time for strolling around, chatting and supporting the racers. First and foremost, Anoushka rode brilliantly: after a great start – she was in second place at the first corner – she got tangled up in a messy situation that left her around the 13th position after the first half lap. Unfazed, she smoothly worked her way back to 6th, through constant high pace rather than big digs, and kept that place until the end of the race.

A big HV turnout in the National Trophy Round 5 at Ipswich across the boys Youth races, with three riders at U16 level and one at U14.

In the the first race Alessandro Sella, Ollie Griggs and Jack Emerson took to the start line but were gridded way down the field. Despite this and being held up on the two brutal bridges they climbed four times each, the boys worked hard through the field to finish creditably with Alessandro highest placed and Ollie and Jack having a battle before Ollie pulled away on a tough, windy course late on.

In the U14 race our lone rider Serafino Sella battled his way round on a course with technical sections and long, tough headwind sections. With hurdles, bridges and a log as well as a tough stair section Serafino coped well and continued his excellent form this year. 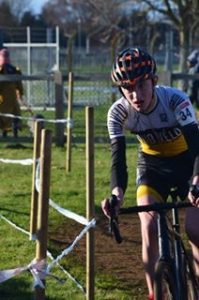 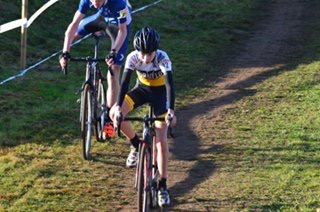 Pre-riding the course showed that it would be very hard going: on mostly flat ground, things were spiced up by two bridges – one of which with steps -, a technical and swoopy wood section with an awkward log hop at the entry, and a “Land Rover” section with a bombhole, a set of stairs, a massive berm and two sets of rollers. With no room to recover between hard efforts, it was not going to be very pleasant. As the “sun” and wind were quickly drying the hard packed course, I made the very pro-looking switch to intermediate tyres, and off I was to the back of the grid.

Surprising myself and everyone else – including the camera-wielding Gary – I had a very good jump off the start, and managed to make up a fair few positions. By the third turn, though, I was back to my “natural” position, i.e. about last, and set to fight with the other back markers.
Since I knew I was only going to be racing for half an hour or so, I went on about my race quite differently compared to normal, going as hard as I could from the first lap and trying to hold on for as long as I could, rather than settling into a good pace and then kicking things into a higher gear towards the second half of the race. In the end, I believe I finished third to last, pulled out after 32 minutes. All in all, it was a much more enjoyable experience than Ardingly: conditions were certainly easier, I was wary of not killing myself too early, and I managed not to get lapped.

Once again, the support was great, with Hannah pedaling to the venue and providing plenty of support – and scorching hot takes on the shipping forecast and the status of various radio personalities, Oli acting as soigneur, and Gary being the chauffeur, photographer and all-around backbone of the entire experience, making everything possible! 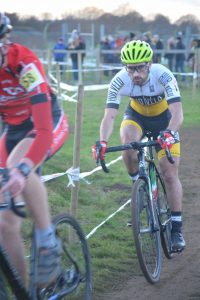 And with news on some friends of Hub Velo…

Tony, reporting from the pits in the senior mens race:

Isaac Mundy (Madison Genesis) got a great start and stayed in the top ten throughout the race. Despite losing his chain at one point, Isaac rode strongly to finish 6th. James Madgwick (Bloodwise-QSW) also had a good start but it was cut short by a racing incident that brought him to the ground in a tangle of bikes and riders. With professional calm, James fixed the chain, knocked the levers back into place, remounted and began to close the huge gap to the back of the race. He worked his way through the field to finish 28th. A super demonstration of racing resilience and determination. Chapeau!